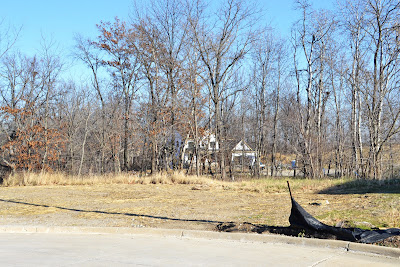 After looking around at existing homes for quite some time, we decided to build.   We had watched more than twenty homes go up in our current neighborhood and building a new home didn't seem too unusual on the west side of Iowa City   Some say that the desire to build a home is in my genes.  I'm not sure if that's true or not, but I did grow up in the house my Dad designed and built.  My brothers have also built homes. How difficult could it be? In May, we found our lot.  It was a wooded lot on the top of a culdesac on a quiet street.  The neighborhood was new and also expecting a new elementary school to open in August 2012.  We suffered a bout of cold feet and didn't move fast enough.  It sold before we could buy it.  Although we were disappointed, we were determined to find a lot or a home that would suit our needs.  After visiting a home built by Rempel Construction & Cabinets, I began to visualize that home (or one very similar to it) on the lot we'd lost.  After scouring the list of available lots, we decided to give up our search for a while. One day later, I received news from a friend that the lot we had wanted had became available again.  Having been given a second chance, we jumped at the opportunity to buy the lot.  Just over a month ago, we closed on the lot.  Today, after several weeks of modifying and finalizing our house plans, we signed a construction contract with Randy Rempel to build our home.  We can't wait!
Posted by Ground Breaker at 2:36 PM